Fun With DNA, or, Will Oprah Boost Me Over the Brick Wall? 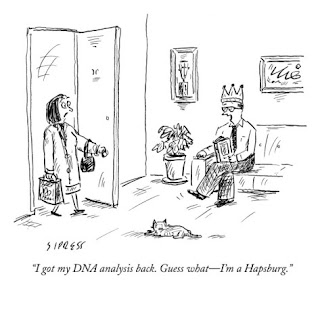 Last year, I listened to a Genealogy Gems podcast, where host Lisa Louise Cooke (http://lisalouisecooke.com/) interviewed Bennett Greenspan, President & CEO of Family Tree DNA.  I'd also heard a talk earlier in the year by Dr. Bryan Sykes, Professor of Human Genetics at the University of Oxford.  In the years since DNA testing has become widely available to the public, I had remained uninterested in the subject.  Whenever a genealogy magazine published an article on the topic, I would skip to the end to see how it turned out.  I also had concerns about privacy, and which company had an established history.
Once I learned about autosomal testing, however, I became intrigued.  This is how the Family Tree DNA website (FamilytreeDNA.com) describes their "Family Finder" test:  "Family Finder uses autosomal DNA (inherited from both the mother and father, four grandparents, eight great-grandparents, etc.) to provide you a breakdown of your ethnic percentages and connect you with relatives descended from any of your ancestral lines within approximately the last 5 generations."
It dawned on me that the window for collecting a DNA sample from my 88-year-old mother is rapidly closing.  And so began the great DNA collection project.  How would I approach the subject from two states away, where my mother lives in nursing home care?  Luckily, my sister lives near her, and was on board.  Now, mom is the feisty type, who doesn't necessarily agree with a first request.  She also spends a lot of time having various medical tests and procedures.  We were afraid that asking for a DNA sample would be one of the few things she could control, and she'd say no.  My sister opened the topic by explaining that our mother would be contributing to science, and that we might eventually know more about the connections and origins of her beloved "daddy."
We also had a secret weapon.  My mother is a huge admirer of Oprah Winfrey, who'd had her DNA tested.  I'm not familiar with the details, but apparently my mother knew all about it.  My sister brilliantly reminded her of Oprah's story when she asked mom about getting a sample.  Apparently, what's good enough for Oprah is good enough for my mom, who agreed with enthusiasm.
A little ruse we employed, was to have my sister rub a plain old swab inside her own cheek, to show how painless it was.  Then she said, "Okay, your turn!," and produced the actual test kit for my mother.  Off it went in the mail to Texas.
Fast forward almost three months.  We were stunned at how eagerly my mother anticipated the results.  When I was notified that they were ready, I took a quick look.  My mother is described as Western European, comprised of 89.78% Orcadian, and 10.22% "Palestinian, Adygei, Bedouin, Bedouin South, Druze, Iranian, Jewish."  Hmm.  They lost me after Western European.  I also checked out some of the people described as having matches to my mother, and will study that topic further at a later date.
My sister, after hearing all of this, got to work on the internet to turn this into an entertainment opportunity for mom.  Turns out Orcadian refers to the Orkney Islands near Scotland, and serves as sort of a genetic crossroads.  Orcadians are the descendants of Iron Age Picts, Vikings, and Scots (sounds pretty British, which wasn't much of a surprise).  There are a number of fun websites online devoted to things like local Orkney festivals.  One of these is the annual celebration of the horse.  Since our mom owned and was passionate about horses her entire life, she was thrilled about that connection, yelling, "See?  I was born to ride!"  And, she gave a belly laugh about her 10% desert heritage.  She hasn't stopped talking to everyone about "her" results.  My sister says it's as though she dreamed up her own perfect genetic cocktail.
Remember me saying I wasn't much of a scientist?  That hasn't changed.  I still have way more questions about what all of this means.  And, I have come to learn that this test isn't going to provide many firm answers.  For one thing, nobody's vetting the research on the paper genealogies provided by the test subjects.  We only know we are related, but not necessarily how, not even whether it's on the maternal or paternal lines. And, in some cases, we might only be genetically related in the sense that we're white Europeans who spent time in Ohio, for example, which isn't the same as being "related."
But, does this matter to my mother?  No!  In fact, we all had so much fun with this, I ordered another test to be done on my mom.  This one is for the full sequence mitochondrial DNA, which studies the mother's mother's mother's line deep into history.   We'll now be able to tell her more about her oldest female ancestor.  No doubt she'll be thrilled about this, too.  I'm having an extra sample kit stored for the future, when newer tests might unlock more about our ancestors.
It's been quite an undertaking, making a rainy winter in rural Washington very exciting for a fragile senior citizen.  Thanks Oprah!