Although not blessed with musical talent myself, I've had a lifelong appreciation for song.  There are some vivid memories I associate with music, which probably contributed to this enjoyment.
My grandmother certainly made an impression, by regularly singing snatches from a couple of pieces from the early part of the 20th century.  The first was K-K-K-Katy, a WWI favorite written in 1917, and published in 1918.  It made a real impression on her at the time:  not only did it make use of her first name, but she was a young teenager, and full of romantic dreams.  I have the original sheet music from that time.  Someone has posted a recorded portion to Youtube at http://www.youtube.com/watch?v=8_J9kPQ8hwA , set to a an appropriate slide show, including a picture of the sheet music.
Another gem from her childhood, and passed on to me, was the 1906 tune about Arrah Wanna, the Indian maiden who married Irishman Barney Carney.  Nothing about this song is historically authentic or politically correct, which didn't register on my little kid mind. 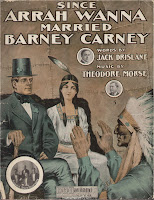 The chorus, which is the only part I knew, went like this:

Arrah Wanna, on my honor,
I'll take care of you,
I'll be kind and true
We can love and bill and coo,
In a wig-wam built of sham-rocks green
We'll make those red men smile,
When you're Misses Barney,
heap much Carney,
from Killarney's Isle.

The online National Jukebox section of the Library of Congress has an original recording at http://www.loc.gov/jukebox/recordings/detail/id/6130/ .
My mother updated the musical tradition, by singing snatches of her own favorites.  One sounded to me like, "I don't want a rickshay romance," but turns out to be a song titled Ricochet Romance, released in 1953.  I think Mom never got beyond the first line of the chorus:  "I don't want a ricochet romance, I don't want a ricochet love." Another random lyric of hers was, "Bongo, bongo, bongo, I don't want to leave the Congo." I was shocked when I heard this ditty sung on a recording by Danny Kaye and the Andrews Sisters, from 1947. The song is actually titled "Civilization," and is quite long and complicated. Another short sample of hers was "Let's take a boat to Bermuda." She got a little bit farther in this one, which was titled "Let's Get Away From it All," originated by Tommy Dorsey. I remember this bit:
Let's take a boat to Bermuda
Let's take a plane to Saint Paul
Let's take a kayak, to Quincy or Nyack,
Let's get away from it all.

And, finally, her classic take on the 1949 show tune from South Pacific, "Bali Hai."  Instead of Bali Hai, she'd bellow, to the same tune:  "BELLY ACHE!"  We'd all guffaw at that one, without a clue of the song's origins.
You can bet that hearing any of these instantly transports me back to a very different time and place.