It's like opening a buried treasure chest, every time I attempt to track down some documentation from my ancient file folders.  The original goal becomes forgotten, as I page through various scraps of paper, some of which are gems.

Take this example:  through my Eckerson ancestors, I apparently connect to several Dutch New York surnames, one of which is Blauvelt.  The Eckerson and Blauvelt names occur regularly throughout colonial New York, so I'm certainly not unique.  I admired how quickly this little paragraph, about a published Blauvelt family history, went from establishing its source citation, to some juicy gossip.

"BURIED IN THE LIBRARY.  In the Library of Congress is a document entitled The Blauvelt Family Genealogy, which covers the history of the family from 1620 to 1956.  Published in 1957, it can be found under Catalog Card No. 56-10936.  On Page 884, under the title "Eleventh Generation" is the notation of the 12,427 descendent (sic) - Durie Malcom.  It reads "We have no birth date.  She was born Keir (my note:  obit says Kerr), but took the name of her stepfather.  She first married Firmin Deslodge, IV.  They were divorced.  Durie then married F. John Bersbach.  They were divorced, and she married, third, John F. Kennedy, son of Joseph P. Kennedy, one time Ambassador to England.  There were no children of the second or third marriages.  Official records show that Kennedy was married on September 12, 1953 to Jacqueline Lee Bouvier.  But there are no records of Kennedy divorcing Durie."

One might question a book that offers so little evidence, but perhaps the newspaper author whittled it down for the purpose of brevity.

I didn't note the date this was published, but since the next article is about the Michelangelo computer virus, (which would affect DOS programs!), I've determined that it must have been about February/March of 1991.   I had cut the Blauvelt piece out and tossed it into a folder which contains a hodge-podge of vaguely-related Eckerson material,  mysteriously titled "permanent holding."  Perhaps that means:   hang onto it until you need it, or forget why you wanted it!

Naturally, I had to do a Google search on this individual.  The rumor is very well-known.  Durie's obituary from 2008 tells of a pretty worldly existence, which sounded like a TV miniseries.  It says she denied the Kennedy rumor, but what it really states is that she never talked about it.

Family Tree - "The Far Side" Style

I've recently been purging some of my ancient file folders, which date back to the early days of my family history research career.  I found this page, saved from one of Gary Larson's "The Far Side" desktop calendars. 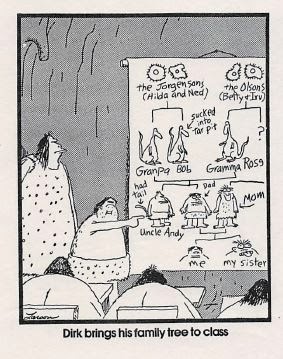