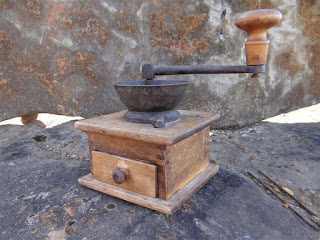 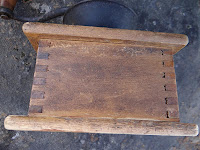 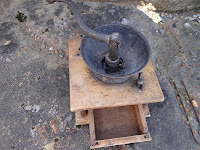 Among the more unusual items that have passed through the generations of my family is this 19th-century coffee grinder.  It's known to have belonged to my 2nd great-parents, Isaac L. Myers and his wife, Hester Burgard, who was called Hetty.  One theory is that he constructed it as a gift for her at the time of their Civil War-era wedding.  I'm not sure whether this part is true.  While there are certainly some elements of the piece which could have been built by hand, the mechanism probably wasn't.  There are some patches of glue on the back side of the drawer, perhaps it was repaired along the way.  I've seen similar items on eBay, so a coffee grinder from this period isn't especially rare.
Isaac L. Myers was born 4 April, 1841, in York County, Pennsylvania.  He served just over three months in Company B of the 1st Battalion, PA Volunteer Infantry during the Civil War.  The timing of his enlistment, in June of 1863, suggests that fears of the Confederate advance toward nearby Gettysburg must have prevailed over the pacifist teachings of the Church of the Brethren, of which he was a member.  Or, perhaps he was restless for "adventure."  Whatever the circumstances, soon after he moved to Astoria, Fulton County, Illinois.  Hester Burgard, born 31 March 1844 in Cumberland Co, PA, was a member of the Brethren Church there.  Isaac had become the singing master of the church, and Hetty "set her cap" for him.  He never stood a chance:  they were married March 5, 1865.
The couple lived at various times in Illinois, Kansas, and finally in Washington state, farming and serving the Brethren community.   They became parents to two sons and two daughters, all of whom left descendants.  Isaac died in 1912, Hetty lived on until 1932.  I was able to visit their last home together shortly before it was torn down.  Today the site, on the corner of Gold & Locust Streets in Centralia, Lewis County, Washington, stands vacant.
Whatever the origins or value of this old, beat-up coffee grinder are, the link to this hard-working, kind, and loving couple is priceless.