Back in the stone age of my ancestral search in 1980, using the resources of a library was a common thing.  I had yet to get a home computer, and digitized genealogical materials were a long way off.  Fast forward to the present, and the belief, by some, that "it's all online now."  (Hearing this makes me cringe, but that's a whole other subject.)  While new resources are frequently being made available via the Internet, the library still plays an important role in making information available to us.

The past couple of years have been about reassessing the data I already have, and seeing where I could have done a better job.  During this process, I realized that I didn't have an obituary for Francis Marion Singer, half-sibling to my ancestor, Allen Ives.  From the records posted on Findagrave.com, I knew that "Frank M. Singer" was buried in Fountain Park Cemetery, Winchester, Randolph Co.,IN.  The photograph of his headstone shows a death date of December 13, 1903.
Armed with a likely date and place, I located a website online for the nearest public library.  Following the procedures outlined on the site, I directed an e-mail to the appropriate party, asking whether someone might check the microfilmed copies of the local newspaper around that date.  I also asked whether they wanted a fee in advance, and whether I could pay extra to have them check for any other articles such as funeral notices, thank yous from the family, and the like.  The fee settled on was $10.  I received a packet before they could have received my check, which included not only the F. M. Singer obituary, but an account of the accident that caused the amputation of his leg (with four doctors in attendance), an update on his condition (he could "set" up), a biography from a county history, and, for good measure, some other obituaries for individuals named Singer, including a very detailed one for his second wife.  Among the information new to me was the description of where his property was located, a pastor's name, and the fact that F.M. Singer was a Mason.
In this example, I use techniques I would have used in 1980, updated to make use of the internet as an additional tool.  In the end, however, it was the extra effort of a dedicated librarian, which provided me with these great, time-saving results. 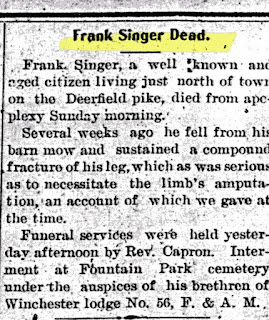