He Spoke to Me Across Centuries: Asahel Roundy

Sometimes, the reward of a journey can't be measured by how much it advances my original goal.  This piece is among the most striking, of the many I handled on my September 2016 trip to New England, even though it doesn't concern my "direct line."
The branch of the Roundy family I’m interested in lived in Rockingham, Windham Co., Vermont.  Some of the family lived across the Connecticut River, in Lempster, then Cheshire Co., now Sullivan Co., New Hampshire.  When I visited the New Hampshire Historical Society in Concord, the welcoming staff was eager to help me connect with the history of my family.  They produced a remarkable document.
This letter was written by a young man during the Revolutionary War, Asahel Roundy.  As a son of Samuel Roundy, he was nephew and cousin to my ancestors, the John Roundys, Sr. and Jr.  I could lift and smooth my hand over the actual paper he used out in a camp somewhere (after the battle of Stillwater, NY).  I wish now I'd taken more time getting the perfect image with a different device.  But as so often happens, I was rushing to find one more source, in one more repository, before day’s end.
The two inserts below show my attempt at a transcription, and the typed explanation sent, when the letter was donated to the New Hampshire Historical Society.  It broke my heart, knowing that this young soldier would die four short months later, after “a littel butter and a littel shugar” had made him so happy.
I will always remember his story. 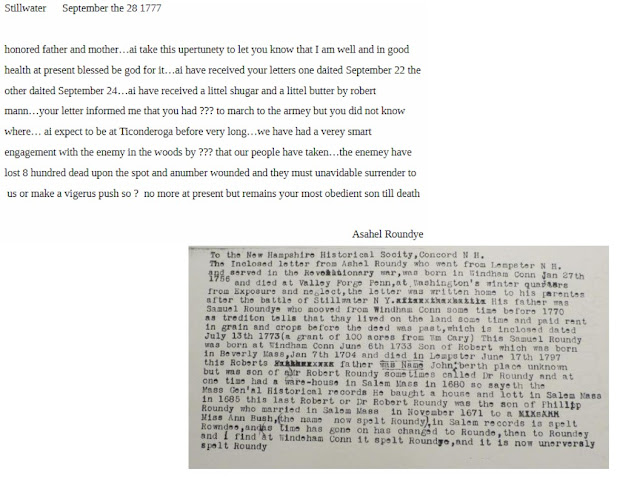 Note:  Evidence of Asahel’s service and death can be found in the roll of Col. Benjamin Bellow’s New Hampshire regiment, the bounty paid for his enlistment, and notation of his death in January, 1778 in the original, handwritten battalion roll.  More about the circumstances faced by his unit is found in the book, "Death Seem'd to Stare": The New Hampshire and Rhode Island Regiments at Valley Forge,” by Joseph Lee Boyle.
Posted by Jennifer P. at 4:49 PM