My grandmother had definite opinions about who she liked and disliked among her relatives. She wouldn't have hesitated to say that her father's sister, Joanna Ives Faidley, was one of her favorite aunts.  Apparently, this was helped by the fact that "Aunt Joie" could be counted upon to take my grandmother's side, when a question of appropriate fashion arose.  My grandmother grew up attending the Church of the Brethren, which her grandfather, Allen Ives (Joanna's father), had founded in Centralia, Washington.  The Church frowned upon extremes of dress.  When my grandmother would ask for her next dress to be sewn in whatever the new style was,  her own mother might frown and be ready to say no.  Aunt Joie could be counted on to come to the rescue, saying it wasn't too extreme, and that it was a fine idea.  Although a devoted member of the Church herself, Joanna Faidley seemed to be pretty whimsical.  She is frequently pictured with a huge grin, and this picture of her own daughters would seem to indicate that they were hardly restricted to severe clothing.  Giving her youngest daughter the name "Bluebelle" indicates that this lady was by no means conventional.  I know the size of the hair bow was envied by my grandmother! 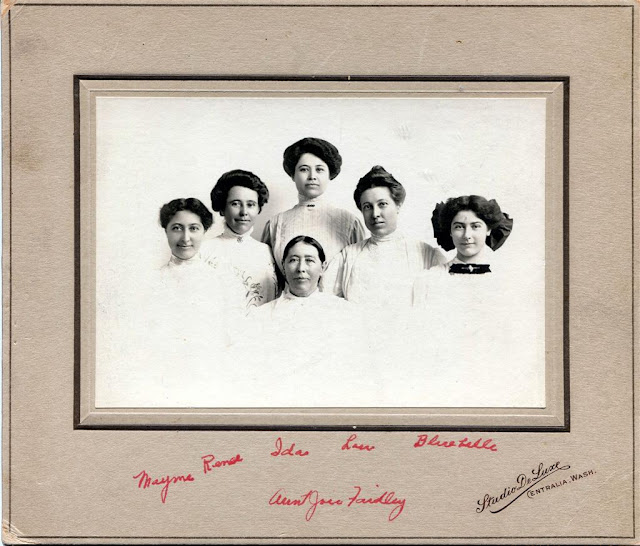 In this picture, Joanna Ives Faidley is seated in front of her five daughters.  From left to right are:  Mayme/Mamie, Rena, Ida, Lou, and Bluebelle.  My grandmother took a red felt pen many years later and added all the names.  While we might question her choice of tool and placement, I am really grateful to have the information.    Comparing the names to available census listings, the caption on the photograph is probably one of the few places where these women are all named at once.  There are, however, name variations to be aware of for clarification.  Mayme is Mary Elizabeth, born in 1883, Rena is Irene/Irena, born in 1873, Ida was born in 1885, Lou was Frances Louella, born about 1870, and Bluebelle was Kate Bluebelle, a happy surprise in 1892.  Sadly, she only lived to the age of 27, and is buried with her father, John Faidley,  in Kansas.
According to the known ages, and the book Family Chronicle's More Dating Old Photographs, 1840-1929, this picture appears to have been taken around 1910-1912.  Note:  on a PC, double-click to open larger.
Posted by Jennifer P. at 4:43 PM