I recently attended the annual banquet and conference held at the New England Historic Genealogical Society in Boston.  Special guests were Michael & Kitty Dukakis, who spoke about their experiences as the children of immigrants, and of their recent European trip in search of their ancestral origins.  The keynote speaker was Professor Bryan Sykes, noted geneticist, who unveiled his newest book, DNA:USA - A Genetic Portrait of America.
There was enough time during my visit to spend three days in the wonderful NEHGS research library, the scope of which is much broader than New England.  Seeking information which might add to my knowledge of my ancestors on the move, I made a point of combing the online card catalog before I left home.  I made note of the following manuscript:

None of these people are my direct ancestors (that I know of!), but I thought their experiences might reflect that of my own family during the same time period in the same locations.  The letters range in date from I think 1809 to 1817.
I was able to handle the actual 200-year-old documents carefully, wearing gloves and using a library card to turn the pages.  There are 11 letters, some easier to read than others.  A very small digital camera, used without a flash, enabled me to record the image without doing any damage.  Some other details I was able to glean were the towns of Castletown(ton), Rutland Co, VT, Poultney, VT, what may be Worthington (unknown state), Auburn, New York, Phelpstown (New York), and Murry (Murray), New York.  Besides the names mentioned in the catalog citation, I saw both David Bates Sr. and Jr., Ruth G____(illegible), a comment from Rachel Partridge who states "mother is not very well and Philips is in a poor state of health," Belinda Bates, Ebenezer Partridge, "Uncle James (Bates?)," and  Eunice Bates, who may be the wife of David Bates, Jr.
One comment gives an idea of the heavy labor involved in moving to an uncleared location:  David Bates, Jr. writes to his father, "I have chopt twenty acres of land."
The more complete picture that can be gained by seeking out these absolutely unique sources is well worth the time and effort. 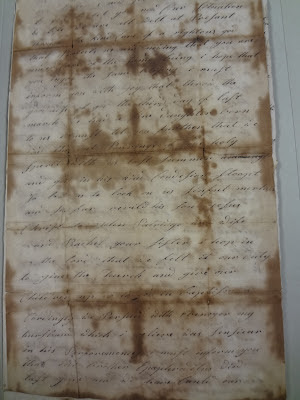